Home » INGYouth and ING Speakers Trainings | ING in the News

INGYouth and ING Speakers Trainings | ING in the News

The INGYouth program has trained almost 300 Muslim teens in 7 states on bullying prevention and presenting on their faith. Our accompanying teen speaker program has produced 85 certified Muslim teen speakers who have delivered dozens of presentations in their school classrooms and assemblies. We’re hosting an INGYouth Speakers Training Workshop at the ING office to certify and prepare teen American Muslims to counter bigotry and respond knowledgeably to challenging questions and negative stereotyping not only from their peers but also from teachers, school staff, and administrators. Register today! All it takes to dispel negative stereotypes of Muslims is a ten-minute face-to-face conversation. An upcoming Islamic Speakers Bureau training at the Islamic Association of Collin County (Plano Masjid) in Plano, Texas on Saturday, April 28th, will provide ordinary Muslims with the tools to answer difficult questions about Islam and to present in schools, churches and other venues about American Muslims. Register today! During Lent, A Christian Tried Praying Five Times A Day

For the Christian period of Lent this year, which ended last Sunday on Easter, ING Community Engagement Manager Kate Chance gave herself a challenge: pray five times each day like her Muslim friends and colleagues. In a new commentary article at Religion News Service, she reflects on her prayers and how they illuminated more than she expected. As Women’s History Month came to a close, ING Content Director Ameena Jandali published an article at Patheos AltMuslim celebrating the achievements of Muslim women around the world while remembering the many “sheroes” whose stories often go untold. ING staff attended a candlelight vigil organized by the NAACP to mark the 50th anniversary of Rev. Dr. Martin Luther King Jr.’s assassination. Dr. King is a faith hero for countless people around the world, and we offer our deep thanks to him for teaching us the value of loving our neighbors across ethnic, religious, political, and racial divides.

For Some Audiences, Our Speakers Could Be the
First American Muslim They Meet

In this photo, long-time ING speaker Noni Azhar explains some of the eye-opening similarities (and differences) among the Abrahamic religions of Judaism, Christianity, and Islam for a San Jose high school class. We know that simple, face-to-face interactions with American Muslims are critical for dispelling negative stereotypes of Islam, and ING’s Islamic Speakers Bureau brings those interactions where they’re needed most. 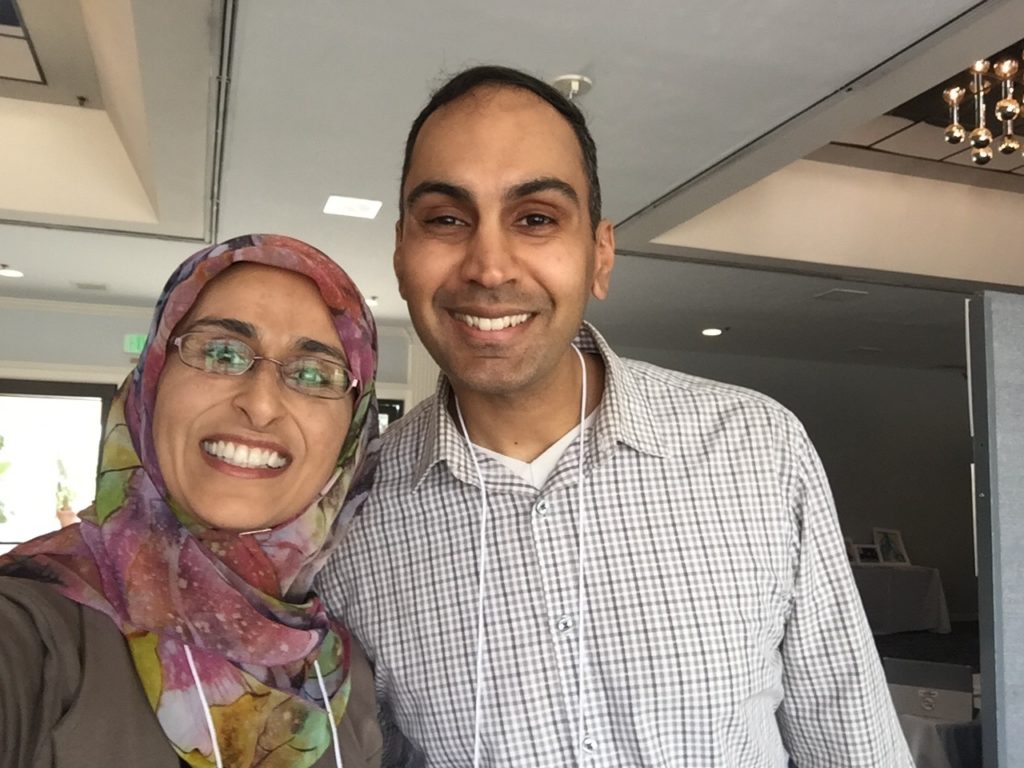 Tehseen Lazzouni, Director of the Islamic Speakers Bureau of San Diego (an ING affiliate) and Murali Balaji, Education Consultant for the Hindu American Foundation (a Know Your Neighbor partner organization) presented on the Know Your Neighbor program at the California Council for the Social Studies annual conference. Social studies classes are prime locations for addressing complex questions about religion and culture, and many Know Your Neighbor partners provide resources for educators to help guide those discussions. You can find that curated educational content at our site. ING Community Engagement Manager Kate Chance will provide updates on ING content and programs for attendees of West Valley College’s Seventh Annual Global Citizenship Conference. The theme this year is “The Faces of Genocide,” and conference attendees will focus on learning about genocide, its legacies, and what we can do to prevent future atrocities.