Cultural competency training for law enforcement can be hijacked by Islamophobic organizations masquerading as nonpartisan experts. The above slides, taken from a training delivered to the FBI, associate zakat (Islamic charity) with funding terrorism and single out Muslims as more historically violent than Christians and Jews. 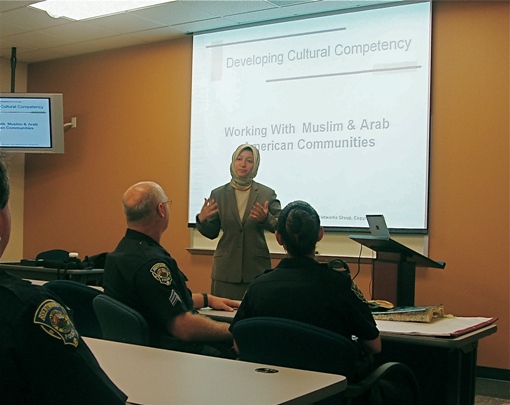 ING has been training law enforcement agencies since 1995. Our flagship training, titled “Working with the American Muslim Community,” has been delivered to thousands of officers across the country, face to face. We now want to put our 60 PowerPoint slides, video resources, and other material online for easy and direct access to police officers.

No one, especially children, should be made to suffer for their religion or chosen identity. We know that education is the key to prevent bullying of Muslims.

Bullying against Muslim students is more pervasive and harmful than you might think. In America, up to 4 out of 5 Muslim students are victims of bullying. Studies show that education is the best way to prevent bullying.

ING’s curriculum on Islam and Muslims in America has already educated thousands of students. Help us reach millions of educators and students across America by donating to create an iPad app about Muslims and their faith.