Home » Your investments in ING at work

Your investments in ING at work

With an unprecedented level of Islamophobia, the demand for ING’s work in education about Islam and Muslims, as well as our interfaith engagement, has never been more important to prevent prejudice and discrimination. With 50 volunteer speakers in the Bay Area alone, we were extremely busy this past year. What follows is a small sampling of ING’s output and impact since the start of the academic year, which we hope will inspire you as it does us to continue investing in ING.

Here is a small sampling of ING’s output since the start of the academic year, Sept. 1, 2015:

We spoke to 25,000 people face to face in 426 groups in the Bay Area, ranging each in audiences between 30 and 500, through face-to-face presentations, training seminars, panels, and webinars.

Here is a sampling of where we presented and your investments at work:

ING’s Interfaith Speakers Bureau delivered panels to 57 classrooms and other venues, to a total audience of over 4,000 people. Highlights of the panels included the following:

Since we launched our INGYouth program in 2015, at the urging of Muslim parents, we’ve held 12 workshops for 600 Muslim students in five states.

ING has participated in a number of high-level meetings with government officials and other leaders. Among the most notable was ING’s participation in the White House meeting that initiated the Know Your Neighbor Coalition, designed to build interreligious and intercultural encounter and cooperation; ING was tasked with creating the grassroots dimension of this campaign, Multifaith Encounters.

Other important state and federal meetings in which ING contributed content and strategies, include:

We know it is, from the audience surveys that we do. To give but two examples, results from September through December 2015 show that after an ING presentation: 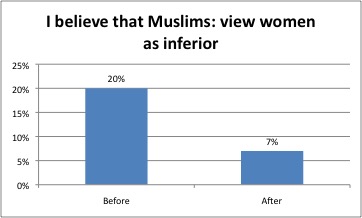 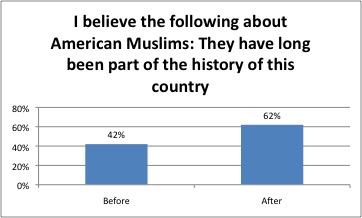 For more detailed information on impact, visit our Impact Page.

All of the aforementioned activity represents ING in the San Francisco Bay Area alone. Our affiliate network around the country has continued to expand this past year and now includes 24 affiliates (regional ING-like organizations) in 20 states and one Canadian province. Affiliates operate in all the major regions of our country, including the West, the Midwest, the Southwest, the South, and the East Coast. ING is truly a national operation and a national presence. With your help, we can further broaden and deepen our reach to expand the important work of educating about Muslims and their faith, as well as their relations to other groups while challenging stereotypes and bigotry.

As always, thank you for your support of ING and its work in education and interfaith engagement.